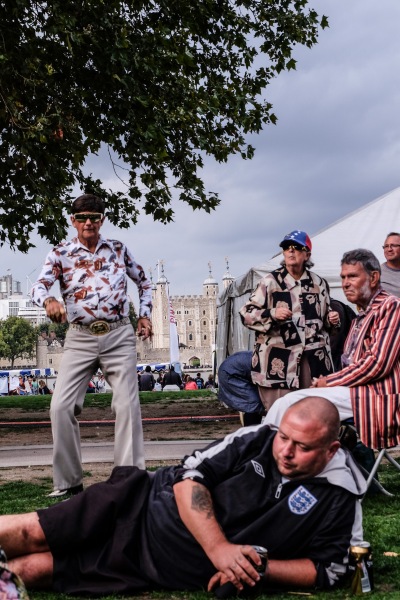 Something that I have always loved about my area of London is all the free music festivals. And also the fact that you can pretty much guarantee that if you go to one you will see ‘the two Elvises’ giving it everything on the dance floor. I’ve seen them strutting their stuff for about ten years now and I can’t tell you my delight when I came back from having been away for five years this April to one of the first festivals of the season to see them there on the dance floor as if I’d never been away. It felt so reassuring – as if the clocks had stood still in my absence.

But at today’s festival something was amiss. Only one of the Elvises was dancing! The other one sat looking incredibly forlorn just watching on from a deckchair. He did not try to hide his misery – their was no stoicism about him. It was like his reason for being had ceased to exist. His partner was trying to take up the slack by giving it all she had but it was not the same. She would never be one of the two Elvises – she knew it, we knew it and he damn well knew it.

“What is going on?” I kept asking my companion. “Why is he not dancing? It’s like he has become suddenly disabled, and yet he is tapping his feet so he can’t be.” “Go and ask him” she said. But she didn’t understand. You don’t talk to the Elvises – it would ruin the whole mystique. They danced; they let you take their photograph, but they didn’t talk.

However, fate intervened and as the final band was packing up the still active of the Elvis, to my utter surprise, approached us and offered us his Churros (a kind of Mexican donut) that they hadn’t eaten. This was the most surreal thing ever for me. It was like Elvis himself had suddenly decided to rise from the grave to converse with me. I seized the opportunity to ask him what the hell was going on. Why was his friend not dancing?! “His knee has mysteriously swollen up” he replied. “He’s devastated.” As I watched him later hobble away with his friend and his partner supporting him it was one of the saddest scenes I had witnessed. I wanted to take a photograph because the scene was so poignant but the battery on my camera suddenly died. It felt apt really, as if he shouldn’t be recorded that way.

The guy lying in front of the free entertainers is John, whom you will probably guess was rather drunk. My friend and I watched him with fascination as he attempted to stand at the end of the event; wobbled on his feet somewhat; gazed to the sky as if for inspiration then went crashing through the barriers in front of the stage and lay prostrate for several minutes. We brought him over to sit with us and tried to prize the drink off him, offering to trade it for coffee, but he wasn’t having it. He turned out to be a very sweet person who worked as a litter picker (it took him several attempts to say that) and kept asking us what football team we supported, as if that was the only important thing in life really (he was a West Ham supporter). As we packed up to go home he asked to take a ‘selfie’ of us. We agreed and on the count of three we both kissed him on the cheeks. I have no doubt that the whole concert will soon become a total blur to John, but I smile as I imagine him looking at his photo maybe on the way to work and thinking “Crikey! I must have had a really good weekend!” Unlike the poor forlorn ‘Elvis’, who was missing his blue suede dancing shoes.