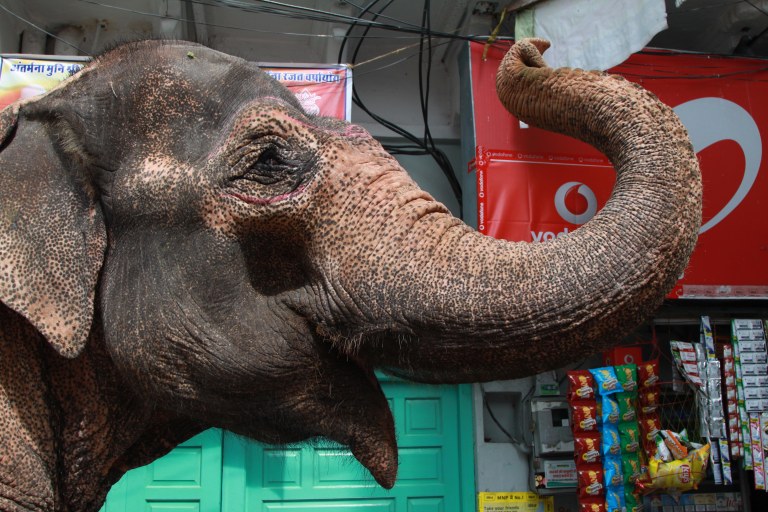 I’m currently in Udaipur –  a wonderful Indian lake city in Rajasthan. Yesterday I was just setting out in an auto rickshaw to explore the town, we turned the corner – and there was this huge elephant in front of us. I leapt out and took a photograph and my Indian companion leaped out after me and gave me 10 rupees to put in it’s trunk (if you look closely you can just see it there).  He (I’m told it was a ‘he’) promptly passed the money to his owner.

I’m not generally a fan of animals that should be in the wild being domesticated but I have to say that this elephant looked to be in perfect condition and seemed so happy that I could have sworn he smiled at me as he took the money. As I saw him plod off, his bottom swaying from side to side, I wanted to run after him and hug him.

Elephants can’t be the most intelligent of creatures but they obviously have very big hearts. I was at the wonderful City Palace museum today and there was a model of a horse wearing a false elephant trunk. It was such a strange sight and I demanded an explanation. It turns out that the Indians would use elephants in battle and they worked out that if you disguised a horse by adding this false trunk the elephants wouldn’t attack them no matter how hard you tried to make them, because they thought they were  elephants.

Given these principals, they must have thought the humans were pretty bad people for fighting each other! Given that the world would be a different place if we shared their morality, maybe elephants aren’t so stupid after all!

3 thoughts on “My first Indian elephant!”